Cathryn McEwen Paintings
"The longer you look at an object, the more abstract it becomes, and ironically, the more real."
​Lucien Freud

Cathryn graduated in Fine Arts at Queen's University in 1977, and continued to study at the Banff School of Fine Arts until 1979. Prior to immigrating to Australia in 1984, she exhibited widely across Canada, receiving a Canada Council Grant and an award from the Print & Drawing Council of Canada in 1980. She received her MEd in Visual Arts in 1999 from UTS, Sydney.
In June and July 2010 Cathryn was invited to the MIRA artist residency in the south of Italy where she and the other residents held a final exhibition at the Palazzo Palmieri in Martignano. She continued traveling from there to the Netherlands, Northern Ireland and Great Britain with a month in London before returning to Sydney.  She was invited to attend the Ondarte International Artist Residency in Akumal Mexico where she began working on a new series entitled "Water Works" ... and water has been her focus for over a decade.
In 2016, Cathryn exhibited with 2 others at Artsite Gallery, Sydney in "The Energy of Water" and recently exhibited in a solo exhibition "Wavelength" at the Gosford Regional Gallery. In 2019, her work was selected for the Muswellbrook Art Prize, Gosford Art Prize and Greenway Art Prize and she had a solo exhibition at the Braemar Gallery in Springwood (Blue Mtns).
In 2021 Cathryn made a shift from studying water and started painting antique glass bottles (a gift of a friend's father collection) and her work was selected in three major Art Prizes around Australia.
She currently teaches drawing and painting at the Gosford Regional Gallery on the Central Coast of NSW.
﻿LIST OF EXHIBITIONS﻿

REVIEWS
2017 "I am particularly enamoured with the junction of sea and land and the visual ever-changing myriad of colour, light, and forms – providing me with endless possibilities to rediscover through the painting process.
I think we all have a fascination for water – in any form and anywhere. It is at once power, peace, perfection, primal, playful, poetic – connecting us all in its mystery and meaning. The challenge as an artist is trying to make “oil and water” mix to capture its changing personalities, its exquisite essence."
Cathryn McEwen "Wavelength @ Gosford Regional Gallery

2016 "Realistic depictions of water dissolve into depths of painterly abstraction as Cathryn McEwen explores the power of contemplative stillness found in the mesmerising depths of rock pools shimmering in the Sydney and Central Coast sun. Ripples disturb this contemplation, gently rolling thought out to sea as McEwen paints with rapidly vibrant strokes, capturing this potential, this thought...."  Artsite Gallery, Sydney
​
2014 "Water is a dissolutory element in the paintings of featured New South Wales artist Cathryn McEwen. The powerful, even Thoreauvian terrain of an abstracted open ocean are skilfully balanced by delicate shades of light and shadow in two highly anticipated new works; a hyper-real rendering of the intricacies of an aquatic environment. We are transported to the sensorial experience of the swimmer; an occurrence that is at once intrinsically universal, and at the same time, inexorably individual. The fluid confines of the ocean, powerfully archetypal, are yet permissive of a very private dreaming."
ROSE VICKERS, Curator for Artfuly Sydney

2012 "My current work deals with figures in water and is a continuation of my interest in body language, emotion and narrative. My intention is to extend the concept of a portrait or portrayal of a figure using the water to express something more about them through reflection or the surface qualities; an alter ego, a deeper emotion, a secret desire, or a darker side of the person involved’."

2011 "Cathryn McEwen's dialogue remains faithful to the importance of body language and a fundamental 'reading between the lines.' Her subjects, immersed in water, are in profound conversation with their own reflection... images which do not always portray that which we'd expect. With titles like 'Beauty and the Beast', ‘Negative Reaction’ and 'Pool of Emotion', Cathryn's images take us to the innermost realms of the human spirit, and forces us to reach far beyond the surface. Her technical work is precise and meticulous, but it is her innate ability to make us one with her subjects and to thrust us into their most intimate conversations which envelopes and holds our attention. Cathryn does not settle with mere aesthetics, she guides us through the undercurrents of a mature discourse questioning that which we perceive of ourselves and that which is perceived by others. Although all of her subjects are only partially submerged in the water that surrounds them, there is nothing superficial about them, or McEwen's work."
ALEC VON BARGEN
Founder
ONDARTE International Artist Residency
Akumal, Quintana Roo, Mexico
“Water, thou hast no taste, no colour, no odour, canst not be defined, art relished while ever mysterious. Not necessary to life, but rather life itself, thou fillest us with a gratification that exceeds the delight of the senses.”
Antoine de Saint-Exupéry – Wind, Sand, and Stars 1939 (Author of The Little Prince 1943)
I love this quote, but I must disagree with one part of it. Water does have colour: especially at those times the surface reflects the surroundings or the changing light; when the light creates prisms on the sand, rocks and vegetation below; when these forms are distorted through an everchanging dance of patterns on the inconstant surface. And the water’s edge is where this magic happens.
It’s these patterns that are the theme of this exhibition – the lines of current, colour, and light. The shore’s edge with its history and mystery is never constant but reliable – and as a painter of waterscapes I am provided with a lifetime of possibilities – a most beautiful mix of the elements and a myriad of personalities.
​2019 Artist statement for "Shore Lines" at Braemar Gallery Springwood NSW
September 5 – 29 2019

“Here in these paintings we see water beautifully defined, its coldness and wetness made exquisitely tangible.  But what first appears to be a realistic depiction of the surface of the sea, soon dissolves into the undefined depths of abstraction. Close up and personal, the eye is seized by vibrant colour and energetic brush strokes, but step back and once more the water’s surface reappears. The abstraction that lies below becomes the reality seen above.”
Penelope Lee, 2017 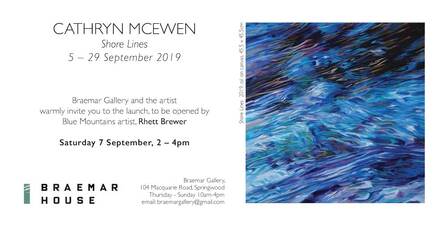 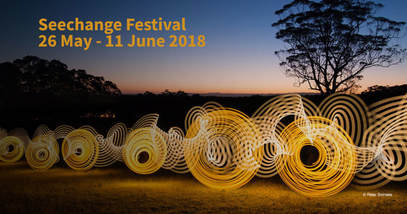